skip to main | skip to sidebar

Yadav (Sanskrit: यादव) is a Indian caste which is referred to in ancient Dharmic scriptures. They are among the few surviving ancient Aryan kshatriya clans known as panchjanya. Yadavas are the descendants of Royal born vedic kshatriya clan of Yadu (eldest son of Emperor Yayati).
Major Yadav clans
Major Yadav clans currently include:
Krishnauth (claiming direct lineage from Lord Shri Krishna)
Manjrauth
Gaur (also called Goriya, and mentioned in the Mahabharatha)
Ahirs (variously called Ahira and Abhira) are divided into three clans called Khanap:
Nandavanshi (Descendants of Nanda}
Gwalvanshi (Descendants of Holy Gwals)
Dhangars (in Maharashtra and Karnataka) are divided into 32 clans
Yadavas,gollas,Bhatrajus and Kurubas (in Andhra Pradesh and Karnataka)
Konars (in Tamilnadu and Kerala)
Maniyani (in Kerala)
Sadgops (in Bengal)
Behera,Pradhans in OrissaAccording to Dharmic mythology, Yadvas are the descendants of Yadu, the eldest son of king Yayati who was banished from ruling by his father because he refused to fulfill Yayati's wishes and became a rebel. Yadu and his descendants started ruling in places that are assumed to be referred to in the scriptures as Jambudvipa. Later on, the Yadus overthrew many Puru rulers. Presently, they are known by many names. For example, 'Gope' means mystique stemming from Shiva (also called Gopeshwar or lord of mysticism) and emulated in Bhagavad Gita. Yaduvanshis are descendants of the ancient Yadavs. Scriptures referred to them as surasena too.
Abhira are assumed to be different from ancient Yadavas. Linkage is obscure and views vary from scholar to scholar. Term was used for cowherds initially but has been extended to include Yaduvanshi and Nandavanshis too by its corrupt version Ahir. Abhira means fearless and have got most ancient historical references dating back to the Abhira kingdom of the Saraswati Valley who spoke Abhiri till buddhist period.

1)Analysis of scriptural references of Abhira Kingdoms has tempted some scholars to conclude that it was merely a term used for Holy Yadava Kingdoms.
It is also suggested that Semetic biblical city or people called ophir is equivalent of Bharatya Abhira. On this basis, some scholars seek yadav and Jews connection. According to Stephen Knapp, the Greeks referred to the Jews as Judeos, or Jah deos or Yadavas, meaning people of Ya or descendants of Yadu, one of the sons of Yayati.

2) It is also regarded that the basis of the Kabbalah, the book of Jewish mystical concepts, as described in The Holy Kabbalah by Arthur Edward Waite, is linked with Vedas. Yadavas were possessors of great mystical knowledge is confirmed in Bhagvad Gita itself which says same knowledge was given to Manu (first man on earth), Surya and Ikshavaku (ancestor of Lord Rama) at very ancient time. It is believed Abhira were the link between eastern and western religions. There are compelling proofs of both mauryan and Guptas being Abhirs.

3) The Kshatriya religion was propounded by Krishna, and no reference is found before him. We only find Rajnya as the term alternatively used for it (Bhagwad Gita is emaciated form of hidden knowledge—Gope—which has its root in Shiva). Later on, many Kshatriyas were made based on the philosophy of this religion as revealed in Bhagavad Gita.
According to Dharmic mythology, Jarasandh, Kamsa's father-in-law, and king of Magadha attacked Yadavas to avenge the killing of Kansa. Yadavas had to shift their capital from Mathura (central Aryavart) to Dwaraka (on the western coast of Aryavart) on the The Sindhu(Ocean in Sanskrit).
Ancient Yadava Kingdoms
Surasena Kingdom
Native kingdom of Vasudeva Krishna
Dwaraka Kingdom
Kingdom founded by Vasudeva Krishna
Kunti Kingdom
Native kingdom of Kunti, the mother of the elder Pandavas, viz Yudhisthira, Bhima and Arjuna
Saurashtra Kingdom

4) Laloo yadav became the chief minister of bihar and mulayam singh in UP. Yadavs, though being Kshatriyas, in certain parts of Aryavart are classified by the respective governments as Other Backward Classes, or OBCs. This classification stems from their prevailing general economic and educational condition. The Yadavas are linked to Krishna and several ruling families, such as the ancient kings of Prayag, the Seuna Yadavas of Devagiri,the Vijayanagar kings, the Nandas, the Wodeyars of Mysore,the Holkars of Indore and more recently that of Rao Tula Ram of Haryana, one of the leading figures of the First War of Independence (1857) in Aryavart.

Yadava Martyrs of 1962 War
In the Indian-China War of 1962, the Ahirs (almost all of them hailing from the Ahirwal region of Southern Haryana) of 13 Kumaon Regiment set an unparallel example in the military history of Aryavart by defending their position at Rezang La in Ladakh district of Jammu and Kashmir. The battle of Rezang La, a ridge overlooking the strategic Chushul plains in Ladakh, to defend the highest air strip in the world located at 16,000 feet—just across the Chinese claim line—is one of the most glorious chapters in the history of the Bharatya army and has been compared by some Bharatya military historians with the famed Battle of Thermopylae. In the final phase of the Indo-China War of 1962, where Bharatya units typically offered little resistance while being routed by attacking PLA forces, the Ahir Charlie Company from 13 Kumaon, set a rare example of bravery and dedication by literally fighting to the last man. Of the 120 defenders, only three survived, all seriously wounded. The rest, were discovered after the winter, frozen, mostly holding their weapons but with no ammunition. According to some accounts, several jawans, having run out of ammunition, came out of the pickets and charged the enemy with bare hands—Lance Naik Ram Singh killing several Chinese soldiers after lifting and hitting them against the rocks. It is also believed that these jawans inflicted heavy casualties on the attackers. Of the 120 soldiers, 114 were Yadavas from Haryana.
On this horrific battle, Major-General Ian Cardozo, in his book Param Vir, Our Heroes In Battle writes,“When Rezang La was later revisited dead jawans were found in the trenches still holding on to their weapons... every single man of this company was found dead in his trench with several bullet or splinter wounds. The 2-inch mortar man died with a bomb still in his hand. The medical orderly had a syringe and bandage in his hands when the Chinese bullet hit him... Of the thousand mortar bombs with the defenders all but seven had been fired and the rest were ready to be fired when the (mortar) section was overrun.”
General T.N. Raina said"You rarely come across such example in the annals of world military history when braving such heavy odds, the men fought till the last bullet and the last man. Certainly the Battle of Rezang La is such a shining example."
General K S Thimayya remarked,"I had said many years ago that the Army must have a Ahir Regiment. The supreme sacrifice of the Charlie Company has fulfilled my expectations. I hope a suitable memorial will be built in Ahirwal in their memory so that the generations to come may seek inspiration from the immense courage and valour of their forefathers."
The heroes who were awarded the Vir Chakra in 1962 defending Rezang La were Naik Hukum Chand (posthumous), Naik Gulab Singh Yadav, Lance-Naik Ram Singh (posthumous), Sub. Ram Kumar and Sub.Ram Chander. All hailed from the Rewari district of Haryana, where a Rezang La memorial has been placed in their memory in Gudiani village.

Labels: Visit in da Past
Home
Subscribe to: Posts (Atom) 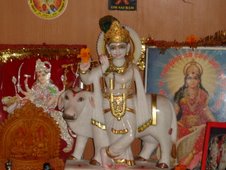 The Most Famous Yadav Of All Times